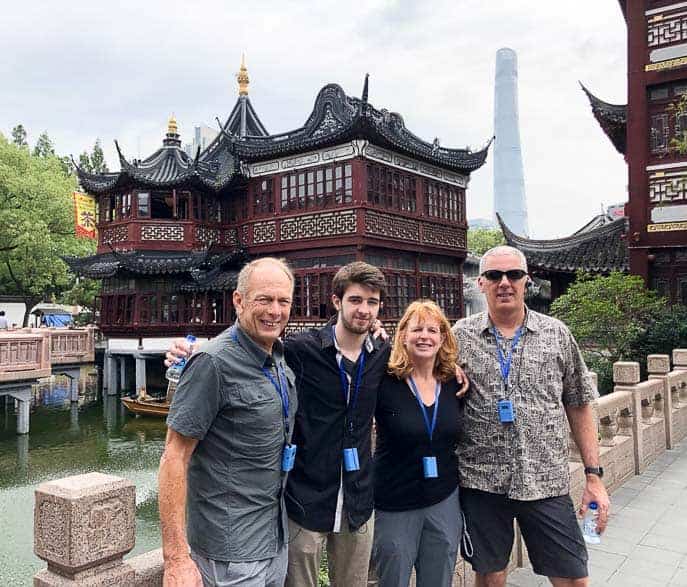 Highlights of China from a Foodie

My trip to China this past June was a family trip inspired by my dad and my youngest son who have always wanted to visit China. We decided to do our trip with Adventures by Disney, since we knew they would do it right! And boy did they! We saw and did so much in 15 days that it’s very hard to condense it into one teeny post, therefore I’m sticking to the food and highlights of the trip, otherwise this post will go on for days.

This post was written by me and is based on my opinions of my trip to China. I did not receive any compensation from Adventures by Disney, Disney, Trip Advisor or anyone for that matter.

We arrived in Hong Kong a few days early to get acclimated to the time zone and have a few days to ourselves before the tour began. We stayed at the beautiful Peninsula Hong Kong. It’s definitely the nicest hotel I’ve ever stayed in. Wow! The service, amenities and breakfast buffet were absolutely amazing!

On our first day we decided to follow Kevin, our local tour guide’s advice and ride the Ngong Ping cable car up the mountain on Lantau Island to see the Po Lin Monastery. It started out with amazing views of the city but became foggy when we arrived at the top.

We toured the monastery, saw the Big Buddha and had tea in the Ngong Ping Village where I purchased some very excellent Da Hong Pao loose tea. Towards the end of the day, the clouds lifted and we could really see the Big Buddha which symbolizes the stability of Hong Kong, prosperity of China and peace on earth.

On our second day, me, being the foodie I am, booked the Secret Food Tour with the Locals in Tin Hau through Trip Advisor. The tour was fantastic! Not only did we have great food, but in between the restaurants we also learned a bit of history about the city, and saw a few of the temples. I highly recommend doing a food tour whenever you visit a new city. It’s a great way to learn about the food in the area.

Luckily we did quite a bit of walking because from the pan-fried buns at Cheung Hing Kee, the brisket soup, Peking duck, chicken feet soup, pork and shrimp dumplings, sesame buns, pineapple bread, and my husband Pat’s favorite – the PJB French Toast thing, we were stuffed!

In addition to the food, we also visited a wet market which was interesting. A wet market is a market that sells meat, fresh fish, and produce. At this particular wet market you could actually choose the live animal you wanted. That’s a bit too fresh for me, yikes!

The food tour day also happened to be our first night’s dinner event with the Disney group at the Peninsula Hotel in Hong Kong. I managed to eat a bit of everything at dinner (because you know, I’m a foodie) but my husband pretty much drank tea.

The next morning was the official start of the China tour. What an amazing breakfast at the hotel! This by far was my favorite breakfast buffet on the trip. I tried Pan-fried Taro cakes. Delicious! Such a selection of food choices. They even had Laugen Brot (pretzel bread) with salami and cheese. It reminded me of my days living in Germany. There was something for everyone and every culture on the breakfast buffet.

After that amazing breakfast at the hotel, we visited Stanley Market, Victoria Peak and ate lunch at the Peak Lookout. In the afternoon we took the Star Ferry back to Kowloon. In the evening we visited Hong Kong Disneyland. My favorite part of Hong Kong Disneyland was the private viewing area for the Electric Light parade-absolutely fantastic. What a very full day! They don’t call these Disney tours, “vacations,” but rather adventures. Now I know why! You’re busy almost every minute!

The next day was pretty much spent traveling to Beijing with a reception at the Peninsula Beijing and a delicious dinner at the hotel. Disney knows how to do it, we had a very nice note and chocolates waiting for us in our room.

Our first official morning in Beijing started off learning how to Chinese Yo Yo in the park followed by a visit to the Temple of Heaven. We had lunch at Huajia Yiyuan (Hua’s) Restaurant. What a fascinating place! When you walked in, they had microgreens and mushrooms growing inside the restaurant as well as an open kitchen. We ate in an outdoor courtyard – so beautiful! A variety of delicious authentic dishes were served including Peking Duck.

Dinner was on our own that night. We wandered around and found Din Tai Fung. I recognized the name as we have the same restaurant in Bellevue, Washington but I had never eaten there. The pork dumplings were absolutely amazing!! We ended up eating there 2 more times once with my son (as he wasn’t with us at the time) and then in Shanghai with our group. I didn’t mind at all!

This day began with a pedicab tour through the Hutong (narrow alleys and neighborhoods) then we joined in paper cutting, knot tying and calligraphy. Knot tying was my least favorite for sure! I was so lost!

The Great Wall was magnificent – so huge- and hard to capture the feeling in words and pictures. What a tremendous feat to build such a wall! It was the largest construction project in world history! It was built to defend the northern frontier of the Chinese empire. We spent quite a bit of the day here, wandering around. This particular section of the wall we visited protected Beijing and the imperial tombs.

Xian and the Terracotta Warriors

This next day was a super long day as we left around 5:00 am, flew to Xian to see the Terracotta Warriors then flew to Guilin later that night. I’m not sure what I expected with the Terracotta Warriors, but I definitely didn’t expect the excavation area to be so huge- 3 separate buildings. It was amazing that most of the sculptures were broken and had to be pieced back together. I found it also amazing that they were really just discovered in 1974 but were created 1700 years ago. What a find!

This was such a relaxing day! After all the traveling the day before it was so nice to just sit, cruise the river and admire the scenery. We enjoyed the “Gumdrop Mountains.” They are so very interestingly shaped. My husband also had fun using Google translator to talk to other tourists.

Chengdu and the Pandas!

Chengdu was one of my favorite places. I especially loved the hotel – The Ritz Carlton. The staff was so accommodating. They had fantastic tea at breakfast, called Sichuan Black. I liked it so much that the hostess even gave me some loose tea to take home. She had it packed up with nice note and handed it to me in the lobby on the day we were leaving.

In Chengdu, we visited the Cheng du Research Base of Giant Panda Breeding. The pandas were adorable and we were even able to see one 5 days old! Here’s more about the tiny panda.

Shanghai was another one of my favorite cities on the tour. Heck, they all were my favorites for different reasons! But I do wish we would have added a few days to the end of the trip so we could have explored more here. Old Shanghai and Yu Garden were gorgeous but we just didn’t have enough time for everything. Guess we’ll just have to come back!

One of the highlights here for me was having dinner at Club 33 in Disneyland Shanghai. I didn’t realize how exclusive that club was. So glad it was one of the perks with traveling with Adventures by Disney!

The best part of Club 33 was the balcony where you could overlook Disneyland. We had a fantastic view of the fireworks that night! Our own private viewing!

More pictures from Shanghai! What a fabulous trip! Until my next adventure, it’s time to get back to Gourmet Done Skinny so I can tour again!

No Replies to "Highlights of China from a Foodie"